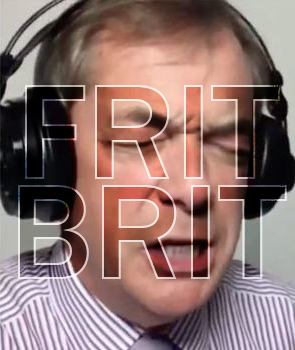 So, it seems Nigel “Blame the BBC” has declined to debate with Change UK’s Heidi Allen MP.  Surely the godfather of Brexit should be only too happy to take on the sopping-wet former Tory MP in a one-on–one debate?

Sadly, Nigel Farage is not the brave soul he would love to have us believe.  His laughable attempt to spin his car-crash interview on the #Marr show this Sunday past as evidence of the BBC ganging up on him is a translucent red herring. He’s on the record saying some strident things as leader of the now-just-racist UKIP, and the Brexit Party reputation laundering exercise relies on him being able to say things without challenge.

Nigel Farage is all set pieces.  His media handlers have warned him that he has to be happy strident unchallengable Nigel, because Nigel under fire tends to wet his political pants.  And so it is with debate requests.

Of course, the political strategists will recognise that, with opinion polls showing his party ahead in the polls, there’s nothing to gain by having the debate.  But we know the truth.  Nigel Farage is frit.  His idiotic lies over Brexit fall apart when they come into contact with commonsense and his stance on immigration and race falls apart when it comes into contact with common decency.  The only hope they have of securing those votes is if people get to see Nigel unchallenged and undebated.