Plan B is scarcely a plan at all. 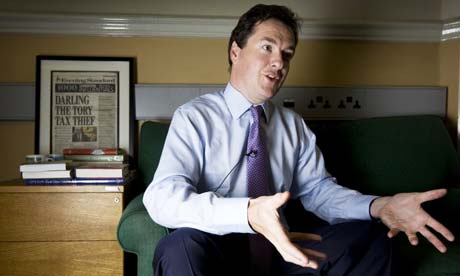 To read this entry, please ensure that:

In 2009, during what was a worldwide recession (Gordon was right about that), the UK had six successive quarters of contraction.  The economy slowed so badly that there were fears of a ‘double-dip’ recession, where a second round of contraction would occur as an aftershock to the first.

This was introduced forcibly as a possibility by the Labour Party, who argued that the cuts the Conservatives sought to make if elected into government would lead to under-stimulation in the whole economy and a wholesale reduction in growth across multiple sectors.  As a political gamble it was excellent – but it would require big cuts to bring about.

The reality is that the big cuts the Labour party argues George Osborne is making simply are not occurring.  And even if they did, they would have to be fucking enormous to bring about, on their own, the sorts of fluctuations the UK economy is seeing at the moment.  There must be some other explanation to what is happening in the economy.  And there is.  It’s called the market, and it made your shoes.

First and foremost, what Conservatives argued in 2009 and 2010 was not that the recession was not a global phenomenon (although we did have good fun making fun or ‘it started in America’) – but that the approach to handling its impact on the UK by Gordon Brown was fundamentally flawed, and that approach began with bad decisions during the boom.

Gordon Brown did not abolish boom and bust – nobody ever could, especially in the most globalised economy on Earth.  What he essentially did was preside over the installation of a systematic overspend throughout government.  With credit and liquidity abounding in the boom years of the late 1990s and early-mid 2000s, he did what comes naturally to the Labour party- as the coffers filled with taxpayers’ money, he redistributed the wealth, developed infrastructure, and enhanced the power and capacity of the state.  In what will be remembered in Economics Textbooks as the ‘Brown Bottom’, Gordon Brown sold 395 tons of UK reserve gold at its lowest value in 20 years, after having given notice of his intention to do so (further reducing the price by 10%), at $275 per ounce.  The sale yielded $3.5bn.  The same gold today has a value of $1610 per ounce, or roughly $20bn.

Despite the fact they now couldn’t gold-plate everything, most people were very contented with their newly invigorated state services.  And if Gordon Brown had ever been capable of abolishing boom and bust, that would have been essentially fine – if the world had suddenly become stable, that level of spending would have become sustainable.  The world economy, however, is never stable.  It is a dynamic, flowing system, understood only by Sam Bowman at the Adam Smith Institute.  And he isn’t telling anyone how it works.

Then along came the recession, partially based on a property bubble, partially based on a collapse in trust in the big powerhouse financial players, including the banks. It would be harsh on the thousands affected to describe it as a necessary adjustment, but in economic terms, that’s exactly what it was.  Through devices and errors, the values of big businesses, particularly the banks, were massively overstated.  The market can only tolerate so much bullshit and as a result the facade of stability and growth began to collapse.  When it did, the speed of the collapse took everybody by surprise.

The UK response to that, fatally, was to spend even more.  Using the flawed language of pop economics, hot liquidity was forced into the cooling economy to warm it up.  More money was printed.  More money was borrowed, and more money was spent, all during a time when it was entirely unclear on what time scales it would be possible to pay down the debt, and how abyssal the recession would turn out to be. Brown and Balls called for more spending.  Brown was challenged repeatedly by people who wanted to spend more.  Across the floor of the House of Commons, Conservatives argued for a slow-down in state spending, but did it sheepishly, knowing that calls for cuts in a recession are as welcome as a cup of cold sick.

What Brown’s fiscal and monetary stimulus did was to fill in the cracks in the economy with hundred-pound notes.  And with the UK economy appearing to be essentially stable, he briefly prevented the market from carrying out its adjustment function.  With credit and liquidity pumped into the system, people kept up their spending, piling on the debt, behaving like little was going on around them. Brown’s bubble of artificial liquidity was making the inevitable collapse inevitably worse.

When an economy’s income falls, the sensible thing to do is reduce the economy’s outgoings. Chunks of infrastructure the government doesn’t strategically need should be sold off.  Austerity measures should be spread proportionately across the economy.  This reduces the need for borrowing, which may still be necessary, if spending has risen to unsustainable levels during the boom.

That, however, is the perfect economy in its simplest form.  Economies are anything but simple – they’re the product of trillions of individual decisions which sometimes in aggregate form patterns.  The UK economy in the boom years was characterised by government spending, some of it sustainable, some of it not.  In the recession and recovery years, the UK economy must be characterised by a conscious effort to halt the growth in state spending as a proportion of the GDP – in other words, the approach of the government must be to promote real growth.

The idea of a Plan B – to do again what Brown and Balls tried in 2009, printing money and spending more, is utterly redundant, partially because we know it has never worked in any real economy, and partially because the rest of the world is in incredible flux – the US is pondering the possibility of its first ever default, the Greek Government has been allowed to essentially default already, and we’re all supposed to pretend the Italian economy actually exists.  We are so connected to these economies, as the most globalised economy on Earth, that any level of unnecessary activity George Osborne undertakes will be eventually dwarfed by the tremors of market functions.

Growth has returned to the UK under a Conservative led government.  The current approach to pay down the deficit (too slowly) and reduce unsustainable government spending over the medium term is the best method to ensure that it stays far into the future.