Looking at Facebook and other social media, there has been a sprouting in recent years of angry, stupid websites dedicated to the breathless criticism of everything politicians and ‘the political class’ do.  Somewhere, in basements and bedsits around the UK, ignorant morons are slaving over their keyboards, desperate to nail their latest bugbear in the political sphere.  They create their images, they concoct their idiotic misinterpretations of political and economic reality and they shit it out all over the social media environment.  Some of them are posted and forgotten, some spread like measles in a primary school across the newsfeeds of otherwise intelligent people.  There comes a time when we must, if we are wise simply stop ‘following’ and ‘unfriend’  these pe 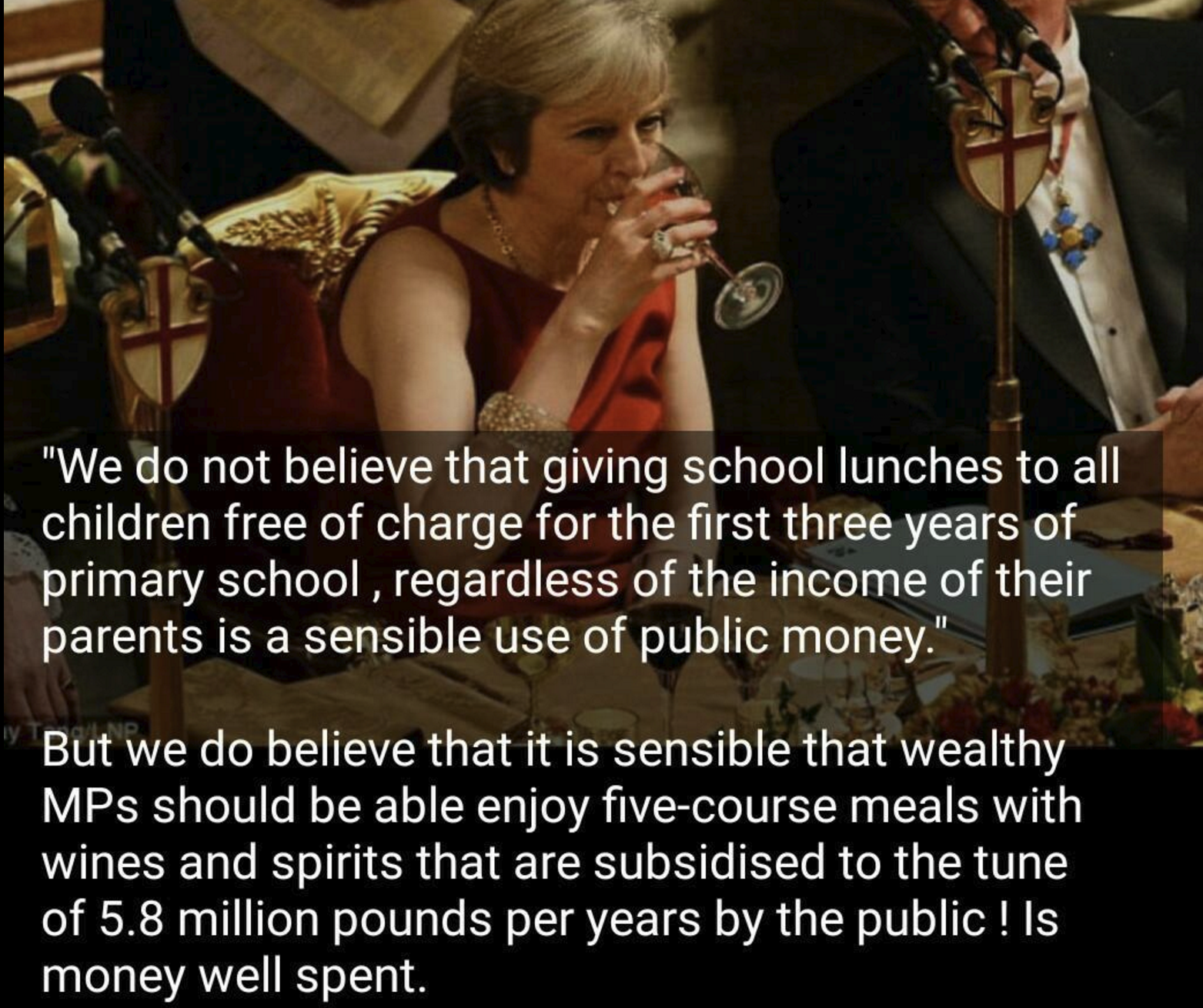 ople – but equally there must be an opportunity to take out the weed killer to the fatuous bullshit which passes as a substitute for political expression.  Friends don’t let friends post bullshit as if it’s okay.

Just look at this shit.  A quote essentially about the need to means-test an uncosted plan to provide free school meals, juxtaposed against a laughably narrow complaint. It’s bad enough that whichever slack-jawed moth-breathing cretin who came up with this can’t find the £ on his/her keyboard.  It’s bad enough that he/she has a really serious problem with the idea of wine with a meal.  It’s equally bad that he/she has a problem with a cup of coffee after one’s starter, main, dessert and petits fours.  It’s unfortunate that he/she believes that there should be a space between a word and an exclamation mark and that that exclamation mark can be used like some sort of vestigial penis to penetrate midway through a clause in a sentence.  What’s really confusing to me is how someone could put effort into making an image, seeking to distribute it and trying very hard to push it across social media without considering (or perhaps being aware of) why the House of Commons serves cheap meals.

Of course, for the sort of person vomiting up this sort of dross, dinner is always a frozen cut-and-shaped chicken kiev with potato waffles and half a tin of peas, eaten alone at the computer screen whilst complaining about Laura Kuenssberg.  They have no concept of the fact a Case Worker in Parliament earns between £19-24k per annum or that a Parliamentary Assistant earns not more than £27,000.  And have to live in London.  The closest location to Parliament where a one-bed apartment rents for less than £1,000 is Hounslow East.

The reason the House of Commons serves subsidised meals is because parliamentary staff exist in a state of penury in a world where they have to be run ragged, constantly well presented and perfectly turned out for their bosses and their constituents.  There are many more parliamentary staff than there are parliamentarians.  Let’s see the likes of this swivel-eyed loon if we decided to bite the bullet and pay the people at the heart of our democracy and bureaucracy what they’re worth – that’d be a lot more than £5.8m.