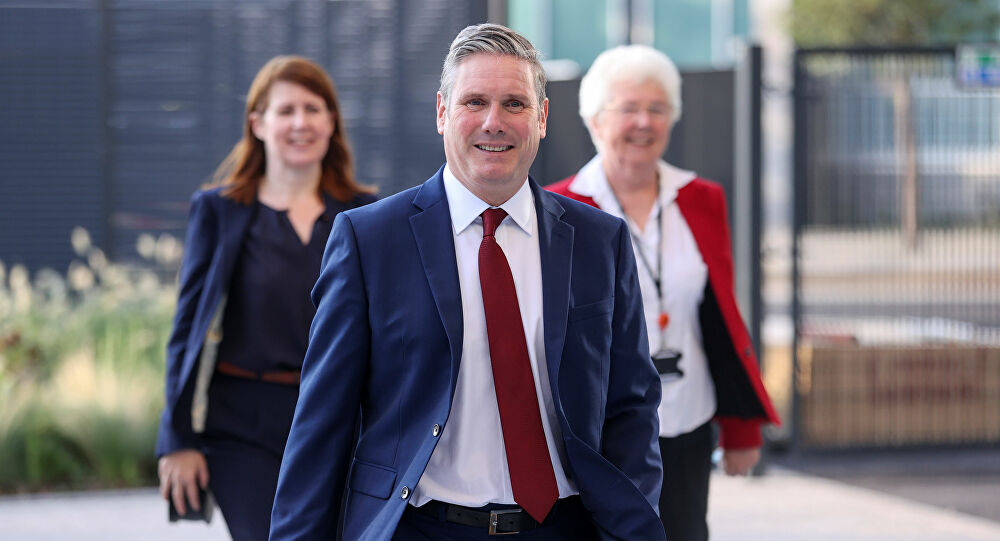 Sir Keir Starmer’s speech, in front of a brick wall and window in Doncaster this morning, was the first step in painting a picture of how the Labour Party will be like with him as leader. It was workmanlike, efficient in its messaging and sought to simultaneously distance the new leadership from the old and create a sense of continuity with the Labour Party of the past. For my money it was effective, but it will have been drowned out by the events of the day.

As is necessary in such a speech, Sir Keir spent a lot of time establishing who he is and why he exists. We were told he likes the NHS and that he enjoyed getting a knighthood with his mum by his side; establishing the first break with the past. Sir Keir is not intending to fight a class war, and it’s clear he’ll be able to defend himself from the idea that he hates the country he aims to lead; this was a bruising form of attack against Jeremy Corbyn and resonated effectively with the public. It’s still possible to have a go at him on the basis of how he wishes to ‘change things in this country’ but by and large he’s going to be selling apple pie rather than apple vinegar.

Another difference came in the very next paragraph. Sir Keir doesn’t hate families, and he seems to think that the government lacks integrity. he’s going to push the propriety and integrity message as hard as he can, as well he might. It’ll take more than a few photos of Boris with a baby sling to convince anyone that today’s tories are a family first institution – this will be a powerful piece of mood music for Labour if Conservatives don’t get stuck into it quickly and effectively.

He spoke about being ambitious for Britain and that today’s government lacks comptetence; again, this is the sort of vector of attack which will resonate if the Prime Minister doesn’t get a tight grip very soon on the functions of government.

The attacks on Boris started out powerful and quickly became less so, with rather too much concentration on the bubble and the political cognoscenti, who one rather wonders care about the fact Boris was a polemicist and Sir Keir was a lawyer, and one wonders if there will be much cut-through from those sorts of attacks. By not going for the jugular on Boris’ character, he played the gentleman, and arguably left more powerful lines of attack for later, when more people will have decided to listen to Sir Keir Starmer.

The political attack on Brexit is excellent, and if I had been advising, is exactly the line I would have given:

And on Brexit, let me be absolutely clear. The debate between Leave and Remain is over. We’re not going to be a party that keeps banging on about Europe. The Prime Minister has repeatedly promised that he will get a deal.

So go on and get one. British business needs a deal. Working people need a deal.

Our country needs a deal. And if the Prime Minister fails to get one, he will be failing Britain. If that happens, he’ll have nobody to blame but himself. And he will have to own that failure. It will be on him.

That’s a great approach to any political argument – it places the onus entirely on Boris and prepares the world for an I-Told-You-So. Much more interesting and amusing, however, was how he went after the legacy of Corbyn. He knew he couldn’t stick the knife directly in between the ribs, so he went about it with some grace.

When you lose an election in a democracy, you deserve to. You don’t look at the electorate and ask them: “what were you thinking?” You look at yourself and ask: “what were we doing?”

The Labour Party has lost four general elections in a row. We’ve granted the Tories a decade of power.

The Tories have had as many election winners in five years as we’ve had in seventy-five. It’s a betrayal of what we believe in to let this go on. It’s time to get serious about winning. That means we have to change, and that’s what we’re doing.

This is a party under new leadership. As I promised on my first day as leader we will root out the antisemitism that has infected our party. We’re making progress – and we will root it out, once and for all. We’re becoming a competent, credible Opposition.

But that’s not enough. I didn’t come into politics to be in opposition, and neither did you. I came into politics to change lives. But you don’t get the permission to act unless the public trusts you. And we still have a lot to do.

I don’t underestimate the work that will be needed. But I can make this promise: Never again will Labour go into an election not being trusted on national security, with your job, with your community and with your money.

That should warm the cockles of the centre-left who understand that a principle is worth precisely the square root of fuck all if you never get to govern, and it will infuriate the people in the party who reckon that being too unlike Venezuela is the UK’s main failing.

There’s lots more to say about this speech – not in itself an exciting flight of rhetorical flourish, but exciting for what it portends. If his shadow cabinet can be competent and effective, there is no certainty about the next set of elections in the UK. But there’s still time for the ghosts of Corbyns past to ruin the party – tories will be hoping he went too far and that they’ll be incensed enough to push back and hurt him – but maybe he’s ready and willing for a fight. That’d be fun.